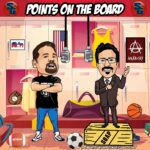 Pioneers of the fantasy sports industry William Del Pilar and Big John team up to bring you Points on the Board, a show blending sports, politics and pop culture that’ll make you think deeply and laugh out loud.

This Episode of Points on the Board:

No indictment for Texans QB Deshaun Watson, thus opening the floodgates to a massive trade. Big John breaks down the players that got us here, Tony Buzbee, ambulance chaser or not, along with Rusty Hardin and his “boys in blue,” connection. The boys also give a hard, open look at the mentality of men.

The Cowboys trade WR Amari Cooper to the Browns, but is Cooper worth $20 million with the numbers he produces? Is he really a No. 1 NFL and fantasy football wideout? Kirk Cousins is staying with the Minnesota Vikings, but at what cost? We also touch on the return of the “GOAT” as Tampa Bay Buccaneers QB Tom Brady, “unretires.”

What’s our podcast without some pop culture and politics? Smollett’s security team knocks down a reporter, Smollett’s belligerent and screams about being “Epsteined,” while not realizing the irony of “Pulling a Jussie” being a thing. The boys break down Smollett’s sentencing.

The Hottest Women in the World: Redheads

The Best NBA Players of All-Time