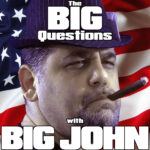 The Big Questions with Big John is an interview show where our own Big John gets the opportunity to have conversations with interesting people from all walks of life.

In this episode, Big John talks with Matt Nagin, a stand up comedian and author.

Perhaps most importantly, Matt always tries to help others. He spent several years as a Talent and Show Coordinator for The Gotham Comedy Foundation, a charitable organization that brings comedians into hospitals and senior centers.

Matt is involved with the Crohn’s and Colitis Foundation and, in 2019, was granted the Long Island Chapter’s Mission Award.

A thirty-year survivor of Crohn’s disease, Matt’s life is proof of the healing power of laughter.

The Way I See It – USMNT, Stephen A. Smith, Deshaun Watson

The Round Up – A new Jim Crow, Gaetz trolls Nets owner, and Paul vs McGregor!