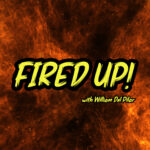 Join “The Conservative Latino” William Del Pilar as he gets FIRED UP taking on the issues of the day and serves them up from his unique perspective. Luckily, nothing is off-limits when William gets on a roll– that is, lucky for everyone except the poor devils he gets in his cross-hairs!

This episode: Del Pilar explores the differences between a conservative and a libertarian, the dysfunction of the Libertarian Party, and the Mises Caucus takeover.

1:04:00 Most Americans are libertarian
1:09:00 Politics isn’t about ideas– it’s about winning elections
1:16:00 How did the Mises Caucus take control so quickly?
1:21:00 Big John hates the “Fiscally conservative, socially liberal” description of libertarianism
1:23:00 Dave Smith as a Mises mouthpiece
1:29:00 The curious case of Marc Victor and Blake Masters
1:47:00 Is the Mises Caucus courting the alt-right?
1:59:00 Democrats and Republicans conspire to keep third parties off the ballot
2:10:00 Wrap-up

The Way I See It – USMNT, Stephen A. Smith, Deshaun Watson

The Round Up – A new Jim Crow, Gaetz trolls Nets owner, and Paul vs McGregor!